The Toyota Cheetahs are travelling to Cape Town to face DHL Western Province in the first match of their Carling Currie Cup second round.   The action at the DHL Cape Town Stadium will kick off at 16:45 with a live broadcast on SuperSport.

This will be a special match for the 34-year-old tighthead prop, Johan (Aranos) Coetzee, who will be earning his 100th Toyota Cheetah cap.

Coetzee is the first South African rugby player to represent a SA franchise in 50 Pro14 matches. He played in 52 Pro14 games for the Toyota Cheetahs between 2017 and 2020.

He was also involved in the Promotion / Relegation match for Currie Cup status against the SWD in 2018.  In 2021, he wore the Toyota Cheetah No. 3 jersey in four games in the Preparation Series.

Aranos has also been playing Test rugby for his home country, Namibia, since 2015, and was in the World Cup teams of 2015 and 2019. He has already played in 25 Tests for Namibia.

The referee for the match is AJ Jacobs.  He will be assisted by Dylen November and Waleed Moerat.  The TMO is Egon Seconds. 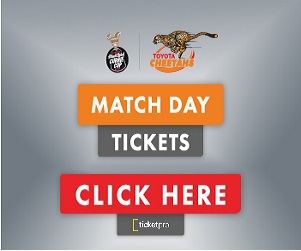